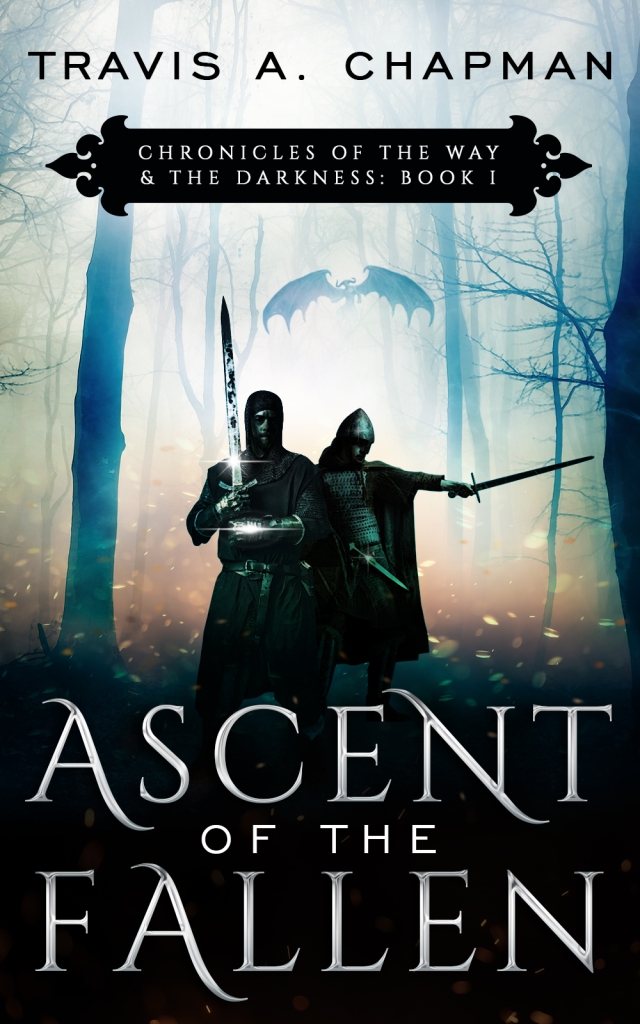 Ascent of the Fallen begins the journey of Lord Fallondon Breck and his company of knights. It’s available at most major retailers:

Lord Fallondon Breck must make a choice: watch his inheritance fall away into ruin, or rejoin the crusade for the Holy Land and win back his former fame and prosperity. However, unseen events and the spiritual forces of darkness are unfolding around him and his band of knights. As demonic foes prepare to unleash their evil designs upon old England, will Fallon have what is takes to come through for his friends, his family, and himself? Will he lean into his faith, of run away from it?

The prequel novella, The Girl & the Golden Mirror is set almost a decade earlier, and is slightly different in the story-telling. While there are spiritual warfare elements, it’s much more focused on how Fallondon deals with challenging situations. Ascent of the Fallen expands on that theme, but includes more explicit behind the scenes looks at the angelic conflict going on around them.

Check out a little preview below, and if you like what you’re reading, head over to your favorite book seller!

Prologue
In 1099 A.D., at the close of the First Crusade, Jerusalem was taken by Christian armies. It was the crown jewel of the Kingdom of Jerusalem, the Kingdom of Heaven. Outremer. The crusader states, established by ambitious men, would rule the Levant for decades.
Jerusalem was lost to these crusaders in September of 1187 A.D. The Kingdom of Heaven began to fall.
Knights and pilgrims from all across Europe returned home to poverty, waste, and corruption. Many returned wounded, some visible, others of the mind and spirit. Inner demons twisted the hearts of men. Only now did they realize everything lost in Outremer. In the midst of such turmoil the spiritual forces of darkness prepare to move.
++ ++ ++ ++ ++
“…God did not spare angels when they sinned, but cast them into hell, and committed them to chains of gloomy darkness, to be kept until the judgment…” 2 Peter 2:4-5

The Veil
Josephial lifted the still form in his arms and turned away. The altar was crimson with dried blood. Adonael was emptied of his life. All that remained was this husk.
“I don’t understand. How could all this have happened?” He looked around at the remains of the cavern, now emptied of its host. Little remained but debris and detritus littering the floor.
Whysper kicked a stone off the towering stalagmite to the floor far below. “I don’t know, Josephial. I see no evidence of the gateway. It was here though, sure as anything. I don’t understand where they went?”
“Out of Beriah. I’ve spoken to the Watchers. The Aeon have seen no sign of them. Neither in our lands or anywhere. I don’t know of anywhere out of their sight. That’s troubling in and of itself.”
Whysper inspected the altar once again, peering into the dark whorls which now painted the surface. Josephial winced as he watched her. He knew it was simply investigation, but the substance of it troubled him. It would forever trouble him. His brother lay in his arms.
She tranced patterns on the ground with a gloved finger. “Did you have any word from Adonael before? Any warning?”
Josephial shook his head. “Nay. Although, there was something odd.”
She stopped her work and stood, facing the towering dark-skinned angel. “Tell on.”
“He was charged with many men, but he asked me to deliver a message to one in particular. A knight in England named Fallon. Said it was part of a broader plan, something his choir had been working towards for some time. You know our attention is focused on the East. So many plots and designs moving together. For every victory we have over the Fallen, we lose more and more souls to their deceptions. Men are wild there. It’s like a fever in some of them. On both sides of the mortal conflict. The discredit done in our name is unspeakable. Yet, we’re so busy fighting our own battles it’s hard to do much else. The Fallen Lord Maimon is moving his forces against our choirs. Uriel is bringing the Kodesh against him. Michael is already engaged daily. Saraquel says we may be mobilized next.
“In the midst of all that upheaval, Adonael asks me to tell Fallondon to rejoin the crusade. Says it’s part of his story. That despite any circumstance or hurdle, I must convince him to retake the cross. When I woke in the halls I remembered the task. Easy enough to meet him in dreams. I painted a picture for him to remember, drawing on his deeds of old. Spoke of the crisis brewing there. I probably let slip there is conflict occurring here as well. I think he’ll take up his sword and calling without hesitation. But really, he’s just one among thousands. Tens of thousands. I thought it was one of Adonael’s fancies. He’s always invested himself in his charges.”
Whysper thought on this. “That’s all he told you? Just to seek out one single mortal and charge him with an errand?”
“That’s it. No more than he did every day.” Josephial looked on Adonael’s still face and wept. He didn’t dwell on how much of the message might have gotten skewed in the telling.
“Let’s return. I see nothing here that will help us. At least we can bring his body back. Saraquel will know what to do.”
With that, she drew open the sliver of light to bring them back home. As it closed around their forms, the cavern dimmed back into inky darkness yet again, silent for another millennia.